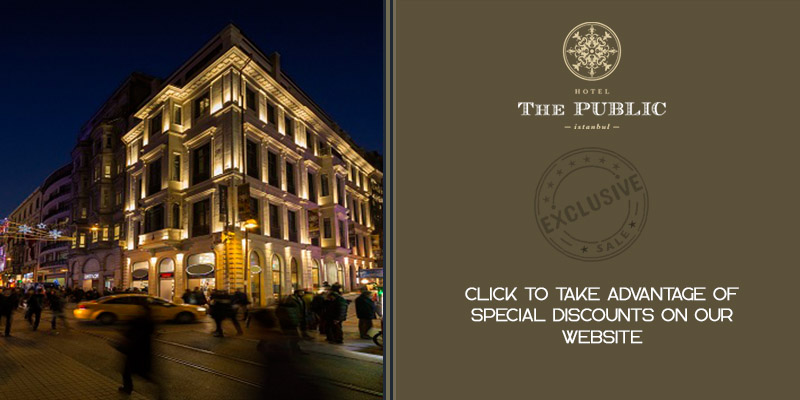 The Public Hotel is the typical example of the late 19th century Istanbul architecture. The restoration of the building which is a first-degree historical monument, was carried out under the supervision of an advisory committee consisting of experts in their subject and academicians especially leagued together for this project in conjunction with the Cultural and Natural Heritage Preservation Board by showing regard to some significant points such as structural reinforcement, load-bearing system security, scientific preservation and restitution, fire safety, architectural history and geotechnical evaluations.

In the course of restoration works, the insertions and fittings of poor quality such as plaster, paint etc. which did not exist in the original architecture of The Public Hotel, were all cleared away and the building was rehabilitated back into its initial form which reflects the authentic architecture of its period. The opening glass roof upon the courtyard at the top of the building was another important constituent of the renovation works. This system enables the lobby floor and some of the guest rooms to receive sunlight directly. The aforementioned courtyard was specially designed considering the today’s hotel guest portfolio.

One side of The Public Hotel faces Beyoglu Istiklal Avenue which is one of the oldest districts of Istanbul, the other side goes down to the boulevard that will take you to Cihangir, a very well-known neighbourhood with its cafes and historic buildings and, at where the artists and foreigners settled in Istanbul would prefer to spend quality time.

As the name of the street by the hotel was recorded as “Su Terazisi St.” in the maps and the annuals, but it is called as “Turnacıbaşı St.” at the present time. The door number reached the present day same as “1”.

The construction of the building completed in three years between 1898 – 1901. According to the researches; the building was in use of the Serbian Consulate.

In reference to the tax rolls obtained from the General Directorate of State Archives, the name of the building was “the Nile Apartments”. The building was designed by the famous architect Hosvep Aznavur. When we check into the other works of the family, we find out that architect Aznavur also designed Abbas Halim Pasa Mansion (today’s Mısır Apartments), Abbas Halim Pasa Chalet in Heybeliada (lifted in 1945, base of the building and the garden walls still remaining, Tuğlacı 1992), the seaside residence of Princess Rukiye in Kanlıca and Helvan Palace belonging to Abbas Halim Pasa in Egypt.